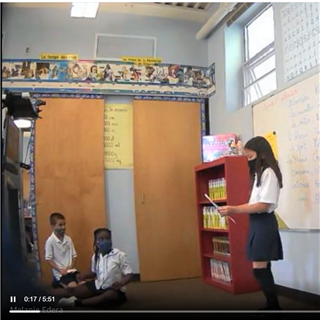 10/30/2020
Dallas International School CM1 (fourth grade) students have been hard at work creating their very own newscast. Each student was assigned a role for the newscast, including an anchor, sportscaster, cameraman, meteorologist, reporter, and more. Students then came up with the information they would be presenting and practiced their portion before taking the spotlight. Students attending class virtually also joined in on the project by broadcasting their segments through Zoom during the recording of the newscast. Once each student presented their individual portion, all the parts were compiled to make the CM1 News.
Churchill campus Librarian, Mélanie Edera, adds, "In French, we have a saying, 'Joindre l'utile à l'agréable.' This means, 'to be able to put together something useful with something fun.' This was the goal of the project, and students learned how to work together in groups, research their individual roles, and then speak in front of the camera. Everyone had so much fun as we enjoyed making this newscast for everyone to watch."