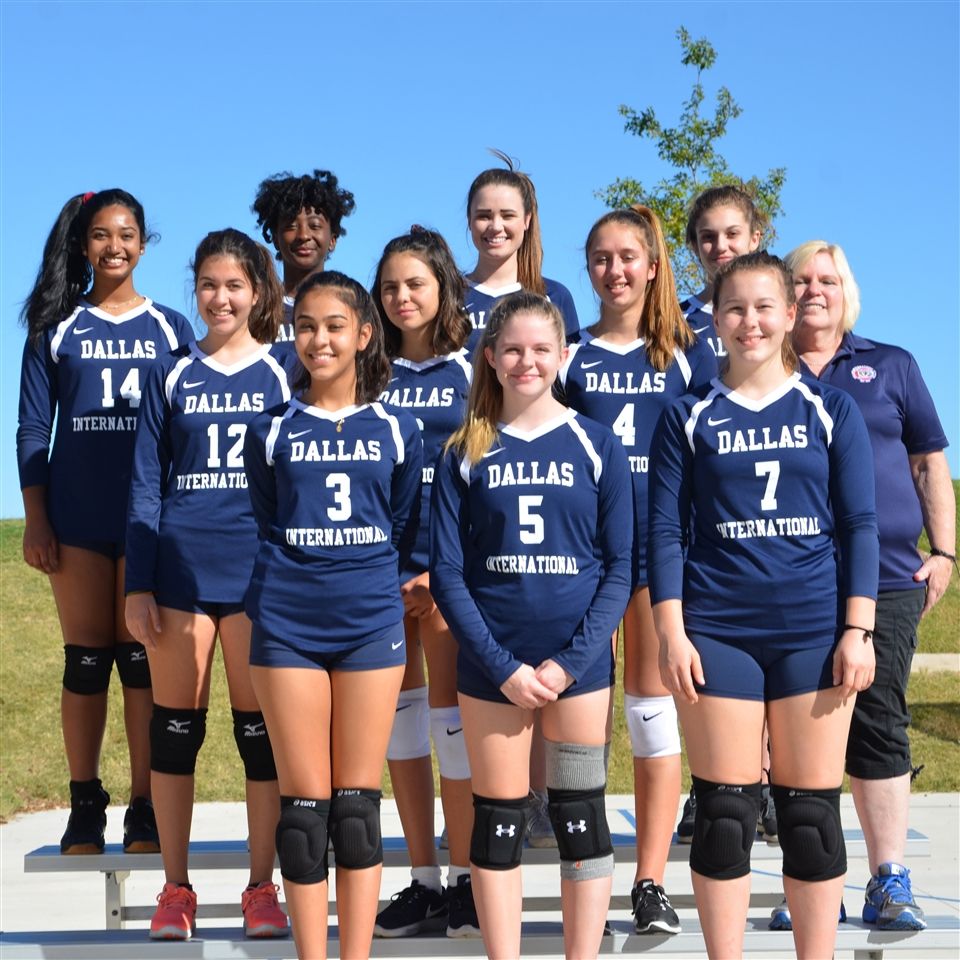 11/30/2017
Trace Levos
The DIS high school volleyball team recently finished their first season together. They talked about the goals they accomplished, the lessons they learned and their plans for the future.
The DIS high school volleyball team is rather new, but you wouldn’t know it by talking to the players. Any lack of experience is made up for with a double order of enthusiasm.
“I joined DIS last year, and this year was the first time I had the opportunity to play on the team,” said sophomore Sanskriti Reddy. “I had played club throughout middle school and my freshman year, so I was very excited to be able to represent our school.”
Reddy’s teammate, senior Caroline Wolfe, had a hand in starting the team. She was among those who first broached the idea of a DIS volleyball team with Jesse Llamas, the school’s athletic director.
“A couple years ago, I talked to Jesse about initiating a high school volleyball team,” Wolfe said. “At the end of my junior year was when we really put it together and gathered the girls. I hope what we started continues as DIS grows each year.”
Though the team experienced the typical ups and downs of a first season, each member spoke passionately about the importance of establishing good roots for the program. Reddy will be here for a few more years yet, but she hopes the team is going strong even when she’s long gone.
“I feel honored to be part of the first volleyball team here,” Reddy said. “I hope that it will last as long as possible. It was a unique experience to deal with the challenges that come with participating in a newly-formed team, but I think we handled it pretty well and managed to have fun at the same time.”
The volleyball players have plenty of positive motivation to look to at DIS, with the high school soccer team having won two straight state championships and other sports competing in the playoffs each year. They’re intent on contributing to the rich athletic history of the school.
“With the team just starting, we have much room for improvement,” Wolfe said. “The goals started out as being able to win a couple games in the year. Once that’s achieved, it’s our dream to go to the playoffs and hopefully add a trophy to the case in yet another sport.”
The inaugural season was a success. Both Reddy and teammate Annabelle Toé placed in the district player rankings. Wolfe and the other more seasoned players provided team leadership, and there were some exciting wins. But overall, the thrill of competing together and having fun was the most important accomplishment.
“My favorite part of this season was watching us learn how to come together and play as a team even though some of us had never even met before,” Reddy said. “I’ve learned that there’s nothing more rewarding than watching a team grow and nothing better than participating in team sports like volleyball, because it gives you the opportunity to build trust with people you may not even have known before.”
Back